History of The Shed

Stamford Bridge is one of the oldest football grounds in the country and has been the home of Chelsea Football Club since our formation in 1905. The Shed website takes it’s name from the “Shed” stand at the stadium, originally a terrace behind the south end goal. it was historically the main ‘home’ end and a standing area up to the 1990s when it became seated.

The Bridge opened as a sporting arena on 28 April 1877. For the first 27 years of its existence it was used almost exclusively for the traditionally popular Victorian pursuit of athletics meetings by the London Athletic Club.

In 1904 the ownership of the modest ground changed hands when Mr Henry Ausgustus (Gus) Mears and his brother, Mr J T Mears, obtained the deeds, having previously acquired additional land (formerly a large market garden) with the aim of hosting a newer sport they had fallen in love with – football – which had swept the north of England and the Midlands and was growing in interest rapidly in the capital city.

After its creation, the stadium remained largely unchanged in appearance until the 1930s when the southern terrace gained a partial covering – a curious structure which would later lead to the nickname the ‘Shed End’.

Ironically, for a name that would become famous in football, the asymmetrical roofing was erected for another sport. Covering roughly a fifth of the terrace area, and designed by the original Stamford Bridge architect Archibald Leitch, it was commissioned by the Greyhound Racing Association who for many decades held dog races on the track that enclosed the pitch. They wanted cover for the bookmakers and their betting customers.

Some 30 years after the structure’s appearance, a letter published in the Chelsea matchday programme from supporter Cliff Webb called for the Fulham Road End of the ground to be known as ‘The Shed’, and for more fans to join a vocal gathering there in order to rival the home end support at other grounds. His requests bore fruit and the stand at the south end which opened to replace the old terrace in 1997 still bears the Shed name today.

Visit the History section on chelseafc.com for more details about the history of the whole stadium.

The Shed website may well contain the longest running official football chat forum on the internet.  It was first started by Blues fans “Jax” originally as an unofficial site in 1995 and then became part of the newly launched official website in 1997.

While part of the chelseafc.com family of websites, and closely linked with the main site, it has been kept separate to group together very fan focused content.  That covers both user generated such as Chat, but also content such as the Rumour Mill which is not official but still something fans are interested in.

In the early ears there was just a chat forum, and there are still a handful of users who have been using since it’s launch, but in 2008 it expanded to include other sections such as Rumour Mill and Shot of the Day.  It has had a few design changes but the current one is the biggest change to bring it up to modern web design practices.

While separate from the main chelseafc.com, it is one of the highest traffic web sections the club operates. 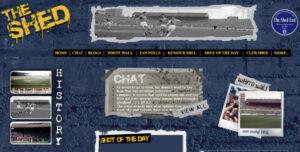 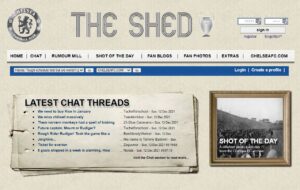